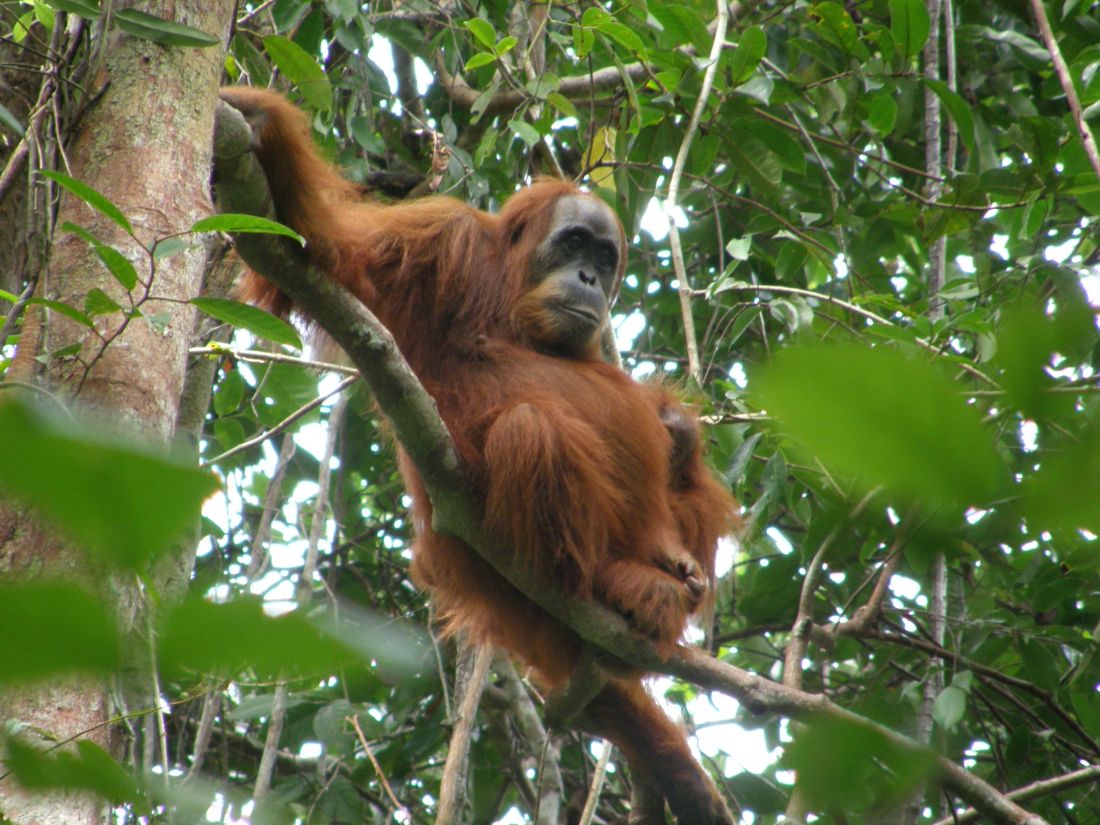 I looked into Suma’s eyes, searching for a sign of recognition. Could this large and limber orangutan and I share a history? Are we somehow related? I had to know.

In September 2011, Michael Ingram and I flew from Pekanbaru to Medan, North Sumatra. Michael is also a member of the genus Trailing Spouse. A trailing spouse is a human being who, for whatever reason, has no real purpose in life but to follow his spouse around the world. The politically correct term is non-working spouse, or accompanying spouse, but Michael and I both like trailing. Our mission on this adventure was to entertain ourselves while our wives did important work on improving the education of children of the Human species.

Michael and I were on our way to the Gunung Leuser National Park to spend some time with the Sumatran Orangutan. The park is almost completely within the borders of North Sumatra, but it extends into Aceh province in the north and touches into West Sumatra province in the south.

The rough landing at the Polonia International Airport in Medan made me wonder about the advances in technology that can send humans into space. Why is it we still cannot bring an aircraft to a “jet smooth” landing? In much of Asia, passengers begin leaving the aircraft before it has actually landed. You are supposed to remain in your seat until “the fasten your seat belt” sign actually goes off. This sign is reinforced by a Pavlovian bell. But this conditioning process is lost on great numbers of passengers who leap from their seats the minute the plane has hit the runway.

The luggage collection room at Polnia International could be described as frantic chaos. In fact it was so similar to Pekanbaru that I felt right at home. Somehow we struggled through the crowd to grab our bags off the carousel. As we emerged through the airport exit gate we were met by Pak Effendi, who would be our tour guide on this trip. Effendi’s job was to entertain and inform us on the three-hour drive from Medan to Bukit Lawang, a village that borders the national park.

Effendi gave us a little history of the orangutans. I had not realized that there are only two orangutan species in the world – the Bornean Orangutan (Pongo Pygmaeus), and the Sumatran Orangutan (Pongo Abelii). In fact, the English word “orangutan” is really a Bahasa Indonesia contraction of “orang” and “hutan”, meaning “people of the forest.”

The Orangutan is one of the Great Apes, a member of the Hominidae Family. This family also includes three African apes, the Gorilla, the Common Chimpanzee, and the Pygmy Chimpanzee or Bonobo. We humans are also proud members of this family.

Effendi talked about the research that asserts that the genetic make-up of the greater apes is 98% identical to that of humans. Effendi informed us that orangutans are capable of speech, but choose not to speak. He smiled and said, “They know that if they ever speak, the government will put them to work.”

The Sumatran Orangutan is a highly endangered species. In 1973 two Swiss zoologists, Regina Frey and Monica Boerner, established a Rehabilitation Center at Bukit Lawang to save the Sumatran Orangutan. The program was designed to return captive orangutans to the rain forest.

When we reached Bukit Lawang, we walked across a suspension bridge, over the Bohorok River, to the Echo Lodge. The lodge is rustic and the grounds are beautifully gardened. It is an idyllic setting with the calming sound of the rushing waters of the Bohorok River. We checked into our rooms and met with Silo who would be our trail guide the next morning.

Setting off at eight am, we were surprised that Effendi was joining us on the hike. Effendi smokes like a palm oil plantation, and has a bad leg from a motorcycle accident. But he was game. Silo, Effendi, Michael and I passed through a small rubber tree plantation that separated the lodge from the national park.

Our first wildlife encounter was with a Thomas Leaf monkey. I was very interested to meet this member of the Langur Family, because I love the langurs in the Rumbai camp forest. Silo stuck pieces of banana on a tree branch and the Thomas Leaf came over to help himself, eating one at a time as he climbed up the branch.

We continued on the trail for another half hour before Silo spotted Suma, a female orangutan, who was lounging in a nest that she built in the branches of a tree. She was a fair distance from us and was pretty relaxed in the nest. Silo called to her and waved a banana. He even called her by name. But Suma did not move until Silo lifted a banana bunch over his head to lure her in.

I was surprised that Silo was feeding these primates in the forest, especially since Suma had been a captive orangutan that was reintroduced to the forest through the rehabilitation program. We have many wild monkeys and gibbons in the forest of our camp in Rumbai and no one would consider feeding them. Since the Indonesian government took over the Bohorok Rehabilitation Center in 1980, the focus has changed from serving the orangutan, to serving tourism. No new orangutans have been admitted to the center since 1996.

Despite this unfortunate turn of events, the current work at Bukit Lawang does educate tourists and locals about the plight of the orangutan, and it does give us an opportunity to have a magical moment with this magnificent primate in her natural environment.

As Suma slowly raised herself from her comfortable position in her nest, we could see a baby orangutan hanging onto her. Suma’s baby was 15 months old, Silo told us. Suma, with baby hanging on, moved up into the canopy of the forest and, out of our sight, swung through the trees until she was above us on the opposite side of the trail. Slowly she descended, gripping the tree trunks, the branches, and the vines with all four hands. Silo says that orangutans have no feet, only four hands. Nearer ground level, but still above us, Suma realized the bananas were on the other side of the trail.

It was interesting to watch her problem solve. She grabbed a loose vine with one hand, steadying herself with her other hands on stronger branches, and began to swing her body across the gap above the trail. Her goal was to reach a thin tree trunk on the other side. That accomplished, she easily moved through the trees to her banana bunch prize. She shared the bananas with her baby and hung around to entertain us for some time after that. We stayed with Suma for about half an hour. Other tourists came along and enjoyed watching Suma allow the baby to climb on her own, never far from mother’s watchful eye.

When we left Suma, Silo began a long descent on a trail less traveled. I should mention that Michael has 20 inches of titanium from mid-shin to mid-thigh of his left leg. The result of high school baseball injury, this restricts the range of motion in this leg such that climbing stairs is a challenge. I reminded Michael that we were the paying customers and encouraged him to opt for the “Chicken Trail”. Effendi had told us that there are three choices of trails in the forest, the chicken trail, the family trail and the rigorous hike. We had made it quite clear to Effendi that the chicken trail sounded just fine.

When we reached the creek bed at the bottom of the trail, I looked across at the impending ascent. Turning to Silo I said with incredulity, “You know Michael has a bad leg, right?” Silo calmly responded, “Yes, it’s all right. We’ll go slowly.” Knowing there was no real option at this point, I shook my head and trudged on. At the top of the ascent we stopped for a welcome rest and a fruit snack – oranges, rambutan and, of course, bananas.

After our break we continued on the trail, and came upon a group of Long-tailed Macaque monkeys. We have many long-tails in Rumbai and these were exactly like ours. As we stopped to enjoy the macaques, Silo spotted the second mother orangutan. This was Pesek – the name meaning flat nose in Bahasa Indonesia. Pesek’s baby was three years old. In contrast to Suma, Pesek allowed her baby a wide range of independence. She was no longer carrying the baby, but training him or her to survive in the forest. It was the baby that responded to Silo’s invitation to have a banana. A cheeky macaque challenged Pesek junior, but the young orangutan grabbed the banana prize and backed off quickly. This encounter included a bit of verbal aggression between the competing primates. Pesek moved quickly within range to protect her baby if necessary.

Pesek and her baby were not so interested in hanging around and entertaining the tourists. When they drifted back into the forest we moved on and descended on another trail down to the Bohorok River. We passed the rehabilitation feeding station on the trail just before noon. The feeding times are early morning and late afternoon. Silo informed us that Suma and Pesek may choose to show up for a feeding if they happen to be in the area, but they are not dependent on the feedings.

When we got to the river, I stripped down to prepare for the white water rafting back to the lodge. As I took off my wool socks a long skinny leech was dancing on my ankle. I didn’t need my salt to pluck him off and toss him into the bush. I waded into the river, but the flow was too fast to swim. So I just sat in shallow water for a cool down. Michael also came into the chilly mountain stream and we sat on warm rocks with our feet in the water to enjoy Silo’s offering of nasi goring. One of the best meals ever, Michael and I agreed! Strange what a rigorous four-hour hike does for your appetite.

The raft man from the village arrived with four large inner tubes. While we ate, he tied them together to make on long raft for the five of us. The rapids were fairly intense but at no point were we in danger of overturning. Nevertheless, the spray of the river water was chilling! It was a great way to finish our adventure.

It is comforting to know that at this time, the rain forest in Gunung Leuser National Park has a large number of Sumatran Orangutans. They estimate that there are 9,000 orangutans in the rain forests of Sumatra. Tourism causes the trail guides to indulge in some unnatural behaviors that seem contradictory to reintroducing the apes to the wild. Nevertheless, it is a thrill to see semi-wild and, if you are lucky, even wild orangutans in their native habitat. It was a very special adventure.

I write to be read. Hope you will do me the honor. View all posts by normflach

5 thoughts on “Hangin’ Out with the Orangutans”